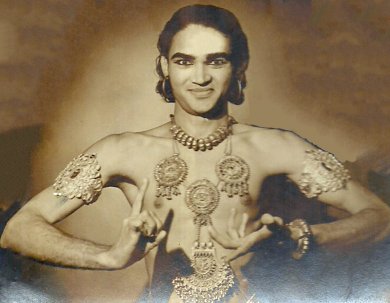 Yog Sunder Desai, a pioneer who ventured into the world of Indian Dance in the pre independence era, was born on July 16, 1921 in Limbdi, Gujarat into a princely family of Gujarat. July 16, 2021 is his Birth Centenary. In his 100th year of life in 2020, Yog Sunder was the senior most living artiste and choreographer of India.His maternal grandfather Jhaverbhai Amin was the Diwan of Limbdi state and his paternal grandfather Ambaidas Jeevabhai's ancestors were the administrators of the Mughals and the Gaekwads.Yog Sunder was born to illustrious parents Bhaktiba, a freedom fighter and Darbar Gopaldas, the ruler of Dhasa State in Gujarat, the first Indian prince to give up his throne in response to Gandhi's call to serve the motherland and join the freedom movement. Darbar Saheb as he was addressed became a prominent leader of Gujarat, leading the masses with the Sardar in Borsad and Bardoli Satyagrahas, Salt Satyagraha and the Quit India movement. President of Kathiawad Rajkiya Parishad and Saurashtra Congress Committee, Gopaldas worked for the unification of the 200 plus states of Kathiawad - Ekam Saurashtra. He was the first prince in India to merge his principality with the Indian Union and one of the first members of the Constituent Assembly of India. The constitution of India bears his signature.
Read more in the site