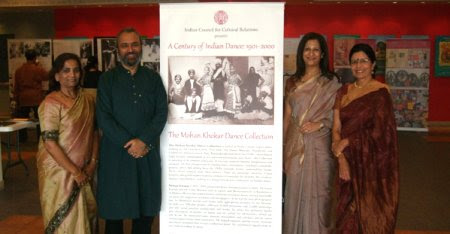 A Century of Indian Dance was culled, collated and curated to be presented by ICCR as part of the international exposition of Indian dance history and heritage.  The ICCR, under the enlightened patronage of Dr. Karan Singh, its President, and Director General Shri Suresh Goel, platformed India's largest dance collection, the Mohan Khokar collection, at a national curtain-raiser in mid July in Delhi. The Times of India hailed it as the dance exhibition of the century, as never before such treasures had been shown. This event in Delhi's Habitat was a precursor to a 10-city tour of USA and 2 cities in Italy during the last two months. As part of live costume display, 5 dancers were also additionally supported by ICCR to travel with the exhibition. They had performed and showcased the same in Delhi and are among the best of Bangalore's male soloists in each form: Bharatanatyam (Satyanarayana Raju and Seshadri Iyengar), Kathak (Muralimohan Kalva and Tushar Bhatt) and Orissi (Lingaraj Pradhan from Bhubaneswar). Satya could not travel as on the eve of departure, he fractured his ankle and wrist in an accident. Having conducted several Dance DISCourses for Alliance Francaise in Bangalore, yours truly put together the whole show and was also its sutradhara.
Read the article in the site
Posted by Narthaki Blog at 01:16 No comments:

Everyone loves to talk about the 'good old days' and say how wonderful things were in the past.  But change is inevitable in every phase of our lives, and change, like sunshine, can be a friend or a foe, a blessing or a cure.  Artistes are very good at adapting to changing times and continuing tradition.  The very existence of our classical dance and music tradition is proof of this.
Read the article in the site
Posted by Narthaki Blog at 17:22 2 comments:

I have a lot more to give: Methil Devika - Lalitha Venkat 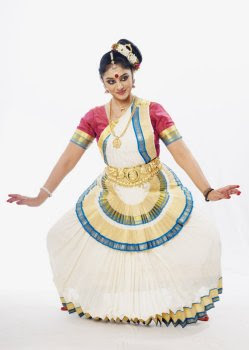 Methil Devika received her initial tutelage in dance at the age of four from Melattur S Natarajan, a disciple of veterans Balu Bhagavathar and KP Kittappa Pillai. In Kuchipudi, she did her formative as well as advanced training under Satyapriya Ramana in Chennai. Devika was also trained by Guru Vempati Ravi at the Kuchipudi Dance Academy of Guru Vempati Chinna Satyam. Devika took her Masters degree in Kuchipudi at Rabindra Bharati University, Kolkata with a first rank and gold medal.

Devika is trained in Mohiniattam under Girija Chandran, student of Kalamandalam Kalyanikuttyamma. She also trained for a brief period under Kalamandalam Leelamma mastering the technicalities of the much acclaimed Kalamandalam sampradaya of Mohiniattam.
She is associated with scholars like Dr. VS Sharma, Kavalam Narayana Panikker and Nelliyode Vasudevan Nampoothiri for their guidance in many facets of choreography.

Devika joined Kerala Kalamandalam Deemed University in 2009. She has developed modules to enable the mentally challenged to express non-verbally. Devika has choreographed the song ‘Malar manchariyil vandineppol' in VK Prakash's film ‘Karmayogi.' She has a master's degree in business administration, with specialization in marketing. She is presently working for a doctorate at the Bharathidasan University.
Read the interview in the site
Posted by Narthaki Blog at 00:44 2 comments: 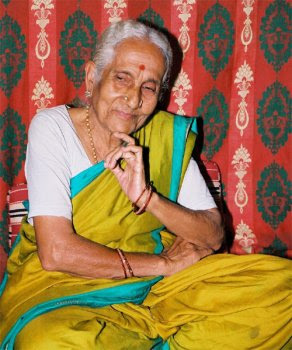 Though my guru, the late Dr. K Venkatalakshamma, was not born in a Devadasi family, she was appointed as a temple and court dancer by the great King Nalvadi Krishnarajendra Wodeyar. When Venkatalakshamma was an eight-year-old girl, she was brought from her village Tangli (near Kadur in Karnataka) by her grandparents to Mysore, to learn Bharatanatyam under the guidance of the well-known dance guru Jatti Thayamma. Thayamma was appointed as Asthana Vidushi when she was just fifteen years old. She went on to be honoured by Dr. S Radhakrishnan with the title ‘Natya Saraswati.’ Venkatalakshamma learnt the art of dance in the gurukula system and her ‘Ranga Pravesha’ was celebrated when she was twelve. She also learnt music and Sanskrit from Asthana Vidwans and performed with her guru for nearly 30 years. It was the time when the Mysore style of dance was at its zenith and in full bloom.

Venkatalakshamma used to tell me often about the great experiences she had during her service at the palace. It seems there were two different types of service: one, ceremonies in the court took place in the presence of the King and royal family only during major festivals, like Ganapati Mahotsava, Balipadyami, Dasara and the King’s birthday. The second used to be a general ritual which used to take place on all the religious days in the palace temples, where dancers and musicians - appointed as Asthana Vidushis and Vidwans - would offer or present their art to the deity.
Read the article in the site
Posted by Narthaki Blog at 18:37 No comments:

When Dr. Mulk Raj Anand had invited me to edit the volume on Bharatanatyam in the early seventies, I had visited Mysore to gather more information on Mysore School of Bharatanatyam. Kathak exponent Maya Rao had worked on this tradition and written about it. She had requested Nirmala Joshi, the secretary of Sangeet Natak Akademi to arrange for documentation of this rare tradition and few exponents. Govind Vidyarthi, the documentation officer of the Akademi, visited the Mysore palace with Maya Rao and photographed palace dancers - among them the most renowned one was K Venkatalakshamma.
Read the article in the site
Posted by Narthaki Blog at 16:38 No comments: