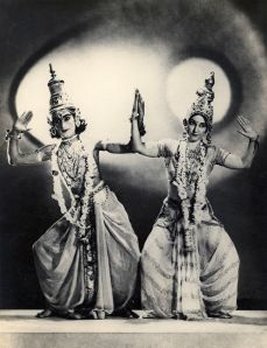 In my days of innocence I did not fully comprehend the greatness of my guru. Realization came to me as I matured. Guruji had prepared me to be a lover of the aesthetics of dance. I realized it more fully when I started writing on dance. I regret that as a writer on dance I had not taken his interview before he left his mortal body on October 9, 1987. I had missed the bus. However I took the help of his autobiography in Malayalam to get an insight into the making of a guru.Babita Nair helped me with the English translation, which I have used in my imaginary interview of my Guru-Master.
Master, under what circumstances did you meet the American born dancer Esther Luella Sherman - known as Ragini Devi?While I was a trainee in Kalamandalam, during the first week of October 1931, a woman from America, the famous dancer Ragini Devi arrived with Art writer G Venkitachalam. At that time, Guru Kunju Kurupp Asan was teaching mukha abhinayam (facial expressions) to us - i.e myself, Madhavan, Sivaraman, Kelu Nair, Krishnan Nair etc. According to the instructions of Mukundaraja, each of us performed one of the Navarasas for Ragini Devi and Venkitachalam. I performed sringaram and roudram rasas. Once the Navarasa abhinaya was over, Ragini Devi enquired from Mukundaraja about my age and my practise period; he translated her question in Malayalam for me. I had just crossed 23 with 11 years of training (both in the Northern and Southern style) of Kathakali.
Read more in the site

Posted by Narthaki Blog at 22:24 No comments: 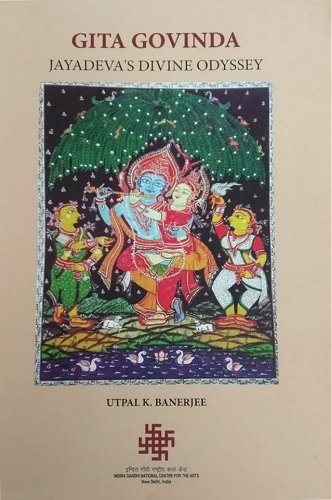 While, fully charged, I was pressing ahead with a three language version of Tagore's 300 songs --under individual titles of Mystic Songs of Tagore; Romantic Songs of Tagore and Patriotic Songs of Tagore with a hundred songs in each volume (for Abhinav Publications) - some dancer-friends came over to ask me why didn't I do a similar English poetry version of Jayadeva's Gita Govinda? When I looked back at them quizzically, they explained that while they frequently interpreted Jayadeva's Ashtapadis in their individual classical dance forms, they had invariably to fall back upon the English prose translations of Gorge Keyt and others for gleaning the meaning of the original Sanskrit poetic text. A convenient rhymed verse translation of Gita Govinda would do them a world of good! Convinced, I began looking at Jayadeva, when I was hooked -- for the rest of my life - with his profusion and command over Mandakranta rhyming scheme!

Posted by Narthaki Blog at 01:53 No comments:

A celebratory festival marking seventy five years of India's 'Azadi Ka Amrit Mahotsav,' the four day virtual event Malhar organised by the WZCC at Udaipur, under the Cultural Affairs Ministry, began with a Kathakali performance pertaining to the traditional repertoire - which, for this critic, represents the best expression of this country's freedom - without having to be shackled to any special patriotic theme.

Posted by Narthaki Blog at 19:19 No comments:

Referred to as the 'Maha Kumbha' of Kathak, Sangeet Natak Akademi's marathon fifteen day festival conducted under the auspices of the Kathak Kendra, featuring interviews with art scholars and celebrated artists alongside lec/dem sessions and performances, was one of its kind - even while some of the choices in selection and those left out of the reckoning, may have caused mixed feelings. This concept of the Kathak Kendra Director Suman Kumar, curated by Subhash Chandra, running in tandem with the celebration of seventy five years of India's Independence, was titled 'Vande Maataram', (Bankim Chandra Chatopadhyay's composition based on the rich iconography in the country, saluting 'Mother India'). While many participants expressed the appropriateness of the title at this point in our history, a few others voiced the opinion that something less 'political and declamatory' would have been better. Clarified in the timetable of events as "diverse expressions in Kathak", what finally emerged in the mixed event largely stressed individual journeys in Kathak, with fleeting moments, when thinking minds communicated the message that arts cannot live in cuckoo land, cut off from the concerns of a nation.

Posted by Narthaki Blog at 13:36 No comments: 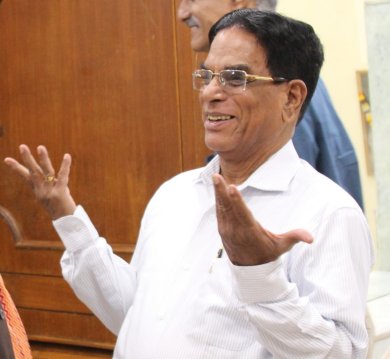 Mumbai's leading cultural personality and former program director of National Centre for Performing Arts (NCPA), K Subash Chandran, left for his heavenly abode on July 21, 2021 in Mumbai. He was 90 and is survived by his wife, daughter Thulasi, son-in-law and two grandchildren. He was suffering from Parkinson's disease and other medical issues and was bedridden for eight months.

Hailing from Kerala, K Subash Chandran had a distinguished career, serving the government and private sector as well. He was private secretary to the former Prime Minister, Jawaharlal Nehru and also the private secretary to Indira Gandhi, when she was the minister for Information and Broadcasting. Subash was also a close associate of former defense minister VK Krishna Menon.

Posted by Narthaki Blog at 07:38 No comments:

"It's time to put our paranoia about the virus on a leash and take it for a walk."

- Shared over a telephone call with Madhu NatarajThe festival season is upon us and with it come several moments to smile as we all attempt to open up our homes and lives to the outside world.Now that the imprint of baby feet have been drawn in the courtyards and altars of several homes across the world to mark the birth day of Lord Krishna, we can prepare for the arrival of beloved Ganesha and onwards to more and more days that will remind us of the importance of ritual and the cyclical spiral of life. No matter which faith one belongs to, the onset of cooler weather and the sun's winter descent always signals more celebrations, prayers and gatherings. Despite the threat of a third wave, people seem determined to find ways to share experiences and the small joys of life.

Posted by Narthaki Blog at 00:15 No comments: 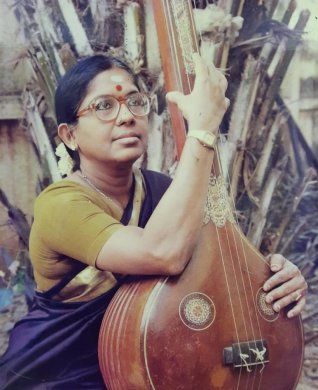 “Two roads diverged in a wood , and I-

I took the one less travelled by,

And, that has made all the difference.”- Robert FrostThe story of musician S. Rajeswari who was conferred with the M.S. Subbulakshmi Award by Tamizh Nadu Eyal Isai Nataka Manram  earlier this year, is one such story where she had to make her choices when she came to the fork in the road.She talks about her journey and her chance encounter with a dance legend, Kumari Kamala, which brought in a new facet to her singing and soon, she carved a niche for herself, and came to be applauded for her contribution to dance music. She soon was the voice behind several prima-donnas of her time.