During the ‘season’ I have been staying for the past six years with Guru Vempati Chinna Sataym at his Kuchipudi Art Academy. On arriving from Bhubaneswar after the marathon international Odissi events, I saw few photos of Vempati sir being honoured at Vijaywada recently. As usual we started conversing, Vempati sir, his two sons Venkat and Ravi, and I.
Read the column in the site
Posted by Narthaki Blog at 00:37 No comments:

Kartik Fine Arts and Dr. Anita Ratnam present the annual Natya Darshan Conference on December 23, 24 and 25, 2011 at Bharatiya Vidya Bhavan, Chennai. This year’s conference is curated and produced by Arangham Trust in partnership with Kartik Fine Arts for the academic component of the December dance festival. Dr. Ketu Katrak (University of California, Irvine) is the consultant for the conference.

The theme of the conference is MAD & DIVINE and it is a gathering of performers, poets, scholars, and cultural commentators on the varied nuances of the lives and creative works of India’s beloved female mystic poets like Andal, Avvayar, Meera Bai, Lal Ded etc.
Visit the site for responses from the participants on their exploration of the theme
Posted by Narthaki Blog at 16:53 No comments:

On Thursday 8th December 2011, our dear Guru Bijoy Kumar Senapati passed away at the age of 75.


The legacy of his life that was dedicated to Odissi dance will continue through Chandrabhanu and the Chandrabhanu Bharatalaya Academy.

Read the tribute in the site
Posted by Narthaki Blog at 02:02 2 comments:

Article - How Malavika Sarukkai led me first to heaven, then to hospital - Bruno Kavanagh

Last Sunday morning I found myself deep inside the marvelous Malar Hospital in Adyar, where a doctor was probing my right ear with a long and pointed implement. He was attempting to remove a foreign object that had become lodged far inside my aural canal, dangerously close to the ear drum.

As he calmly and competently went about his work, I asked myself the question: “Am I the first person in history to be hospitalized as a result of attending a Bharatanatyam performance?”

Perhaps I should provide some context to this bizarre turn of events: my injury was sustained during a performance the previous evening by Malavika Sarukkai at the Sri YGP auditorium. It was self-inflicted: as is frequently the case at Carnatic concerts and dance recitals in Chennai, I had found the volume from the speakers stacked beside the stage (and throughout the auditorium) unbearably loud. But rather than complain, or leave (since I very much wanted to see Malavika perform) I decided that the best way forward would be to stuff the well-chewed corners of a paper napkin into each of my ears, to filter out the excess sound.
Read the article in the site
Posted by Narthaki Blog at 01:50 3 comments: 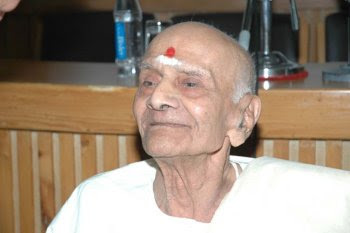 There are critics and critics, some glorify their travels, some their connections. One man stood just by the power of his pen. His name was PV Subramaniam.

He would slide quietly into any available seat of a hall and inconspicuously observe. He did not wear flashy clothes to attract attention or hug and kiss, later only to knife in the back!  This man, our man, his opinion counted and his observation set the tone for the season. The man - PV Subramaniam - strode like a giant in the field of dance and Carnatic music criticism. “An Andhra family doctor friend never called us three brothers by proper names. As it happens in Telugu, he added ‘du’ to each of our names. Hence, Subbudu, Krishnadu and Ramadu.  My brothers shrugged it off. To me, it stuck like glue.”

Read the article in the site
Posted by Narthaki Blog at 17:30 5 comments:

'Sabha hopping' is a commonly used phrase among the artists and innumerable rasikas visiting Chennai from various parts of India and abroad during the December music and dance season.

What exactly do these Sabhahoppers (S'hoppers, for short) do? Attired in their newly purchased wardrobes, most of them visit various sabhas to enjoy performances by their favorite artists. The schedule starts from morning and continues late into the night. Attending a seminar in the morning, having coffee and snacks in the sabha canteen, meeting artist friends in green rooms and wishing them all the best while being photographed with the artists - all these are important items on the agenda. The photographs are later posted in social networking sites like facebook, etc.

Read the article in the site
Posted by Narthaki Blog at 10:52 No comments: 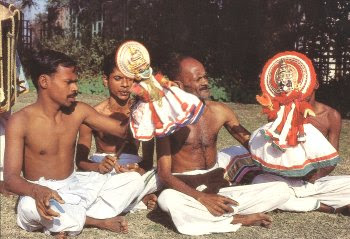 Pavakathakali or Puppet Kathakali is an art form that has had its share in making Kathakali, the classical dance theatre of Kerala, popular even from the time of its evolution.  It is possible to see in different regions across cultures the puppet version of their important art forms.  Bunraku is thus the puppet version of the Japanese Kabuki; the Chinese puppet theatre has elements that compare with the Beijing Opera.  The dance drama Yakshagana from Karnataka in India has with regional variations its incarnation in the Yakshagana puppet.  The fact underlined is that when children and adults see a character unfold through puppets, it leaves a strong impression in their minds.

In olden times, puppeteers all over the world travelled a lot.  They would bundle up their puppets and travel across villages, from house to house and perform in the domestic space for children and adults.  When such itinerant performers arrived in the ancestral homes, the hosts paid a lot of attention to take care of their needs for the performances generated a lot of excitement in children.
Read the article in the site
Posted by Narthaki Blog at 23:13 No comments: