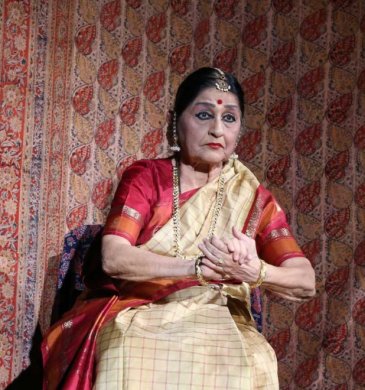 Mohiniyattam, the sole female dance heritage of Kerala, had for long been sandwiched between Kutiyattam, a highly evolved Sanskrit theatre tradition and Kathakali, the globally renowned classical dance-drama. Its history, till the dawn of the 20th century, was replete with illusions, myths, half-truths and highly individualistic interpretations. Since the resurrection of Mohiniyattam at the Kerala Kalamandalam in the 1930's by poet laureate Vallathol Narayana Menon, its unsavoury reputation started shrinking gradually. In course of time, aspirants from middle-class families boldly came forward to enrol themselves as students of Mohiniyattam at Kalamandalam much to the relief of Vallathol. By the early 1970's this exceptional lasya dance form drew the attention of dancers and scholars from outside Kerala and India. Dr. Kanak Rele who took up the preservation and promotion of Mohiniyattam as a noble mission was then a young dancer based in Mumbai and had already been trained in Kathakali under the renowned Panchali Karunakara Panikkar. She had had acquaintance with Mohiniyattam too.
Kanak Rele came over to Kerala Kalamandalam mainly as a researcher to explore the history and aesthetics of Mohiniyattam through observation and analysis of the sources available. She did document the contributions of the surviving stalwarts in the field who were mostly confined to their practical knowledge. Of those whom Kanak Rele documented, she found the stylistics of Kunjukutty Amma far more appealing than those of the rest. Armed with the documented materials, Kanak Rele delved deep into the craft and content of Mohiniyattam. At the theoretical level, she garnered support from Hasthalakshanadeepika, a manual on the hand-gesture language widely in vogue as an indigenous text in Kerala, Sage Bharata's Natyasastra and Balaramabharatam of King Karthika Thirunal. With all these, she came out with her concept of body kinetics which became instrumental in providing a scientific temper and academic rigour to the art of Mohiniyattam.

Anonymous derogatory comments will be removed. Please provide your name and email id along with your comment.