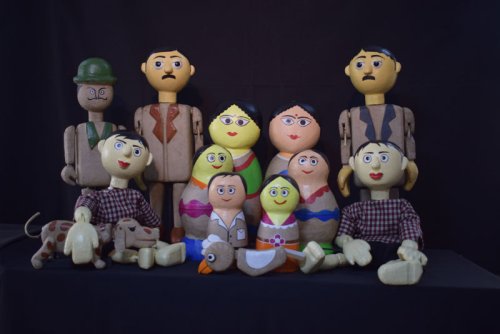 Chi Chi Land, a puppet play mounted on March 21 (incidentally, also the World Puppetry Day) by Kolkata’s well-known Dolls Theatre, was a most eloquent case in point to illustrate the master puppeteer’s observation. Written by Debiprasad Sengupta, its story had three pivotal points of a perfectly funny children’s story, namely, two innocent brothers’ indulging in child like quarrels on being left-handed or right-handed in habits; their falling apart (under external provocation) into dividing their parental land between themselves with a wall erected in between; and their eventual (again being provoked) resolve to seriously fight against each other starting with stones and slings, and ending with guns, canons and missiles. All these sad events leave their growing children utterly bewildered as to why they can no longer play among themselves, because of the divisive wall and the frightening uproar made around them by the swishing weapons of the adults!Conceived by the gifted young puppeteer Sudip Gupta, an awardee of Sangeet Natak Akademi, the play presented very eloquent string-puppets comprising the two playful brothers and their grown-up counterparts and one real life theatre actor Tom Tom (played well by Utsav Rauth with a stylish make-up) as the arch villain – with crafty interventions and making thereby his own pots of money! – made the perfect staple for enjoyment of children and adults alike. This was clearly evident among the surging viewers on a post-endemic Sunday proscenium audience. Mingling skillful traditional puppetry with real action human characters is a recent trend that has emerged among contemporary puppeteers and Sudip made full use of the trend to make his boisterous children’s tale to make its points!
Read more in the site