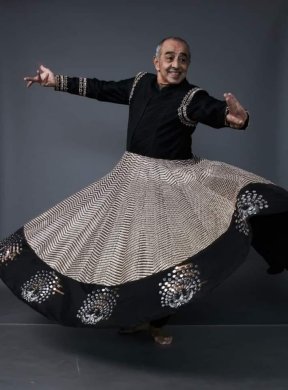 Linking the ethos of the Parsi religion to dance is both quixotic and interesting. The approaching Parsi New Year Navroz (on March 20) provides an occasion to do so. The lone figure whirled atop in the Indira Gandhi Centre for the Arts. The churning of the dancer lit up like a 'Bindu.' The figure moved it, giving way to concentric circles of emanating energies, slow and continuous. Yet, magically, the figure itself in the centre like a 'Bindu' communicated a potential seed's stillness. The dancing figure was none other than the iconic contemporary Indian dancer Astad Deboo who passed away in December 2020.Astad began his journeys in dance with Kathak. In this form, the 'chakkars' (pirouettes) operate as a tool for completing a ritual in the larger frame of a spiritual aesthetical pilgrimage. He later delved into Kathakali, the ancient theatrical form honing the expressional art of communicating emotions. His immersion in dances and dancers from various traditions from India and worldwide gave him the multilingual vocabulary of organizing communicative movements to project contemporary themes. On a parallel level, he was a warrior on a mission, a humanist who explored and advocated social change through dance.