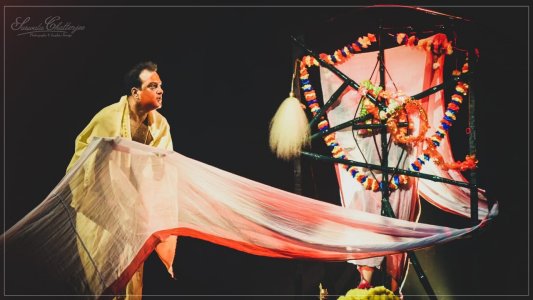 Chetana, the celebrated theatre group from the eastern metropolis under the baton of the thespian Arun Mukhopadhyay, would earn its golden jubilee laurels by next year and has been known in India and abroad for several of its landmark productions over the half century of its existence. Indeed, one of its early productions Jagannath mounted in1977 with Arun himself in the eponymous role, made a performance history for group theatre and ran for a spectacular number of nearly 1000 shows, as was proudly announced in the international press conference by the director of Bharat Rang Mahotsav in the capital sometime in the early 2000s. Here is a quick word on the play's overarching excellence.

Jagannath was an adaptation of Lu Xun's Chinese novella, The True Story of Ah-Q, and was indubitably a legendary production of Bengali theatre. Re-worked and Indianised, Arun's character Jagannath was a poor, uneducated villager. All the villagers disregarded him and people of higher ranks did not even consider him to be a human being. No matter what wrongful or unjust treatment he was subjected to, there was no inclination in him to protest or to resist. At the end of the story, when Jagannath was charged with sedition by the then regime and sent to the gallows (on a false charge of being a "revolutionary"), the protagonist made an eloquently defiant gesture against the conspiring world and voluntarily got the noose round his neck! In fact, that defiant laughter of his still rings out in the face of all the oppressive powers on earth, who level such wrong charges of sedition against their innocent victims, just as Nora's slamming the door on her husband's face - at the end of Ibsen's The Doll's House echoes and re-echoes against the global patriarchal society through the centuries, as trenchantly noted by George Bernard Shaw.Kusum Kusum and Girgiti presented on proscenium stage on February 28 by Chetana were equally eloquent productions, especially after the pandemic times! While the first play was an adaptation from Girish Karnad's Flowers, a grim tragedy with deep folk roots, the second one was a heady comedy - again an adaptation from Safdar Hashmi's Gurgit and rooted, in turn, in Anton Chekov's Chameleon - and a boisterous take on the quirky ruling class!
Read more in the site
Posted by Narthaki Blog at 20:42