Cloud messenger from beyond borders - The Eastern Eye: Column by Dr.Utpal K Banerjee 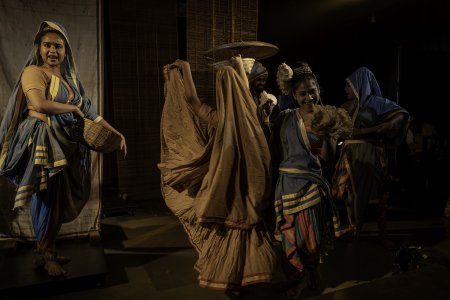 Meghadootam, christened as Viraha Gatha (Elegy of Separation) and presented on February 17 on proscenium stage by 'Chidakash Kalalay' with munificence from Ministry of Culture, came actually as an overture for a 3-day long Gatha Utsav: Festival of Dance, Music and Theatre: with Padmanka Gatha (play) and Balai (a theatrical monologue on February 18; and a varied fare of Paanch Kaan (another theatre monologue), Dashavidha Rupam (duet-dance) by Akash Mallick and Pinki Mondal, solo music by Debjit Mahalanobis and the final duet music by Debjit and Subhendu Ghosh, all on February 19.

But Meghadootam, which only is reviewed here, had its special charm in being primarily an Urdu version (with a smattering of Multani, Sanskrit and Hindi), composed in 1987 by Raja Pratap Singh Gannari, a poet from West Pakistan, who had migrated to India. [Surprising though it may seem, just as Sanskrit poetry has its superbly nuanced meters, alliterations and other decorative features, Urdu sher-shairi (poetic recitations) - especially across the frontiers, as was this critic's experience once in the early 1990s -- has its highly developed Nafasat and Nazakat (beauty and delicacy), guttural utterance of nukhtas (accents), prolonged pronunciation of compound words, and nasalisation of n-sounds at the word's end (like gulistan, Guldastan, et al.) that make its poetry utterly bewitching!]
Read more in the site