A taste of Kathakali - The Eastern Eye: Column by Dr.Utpal K Banerjee 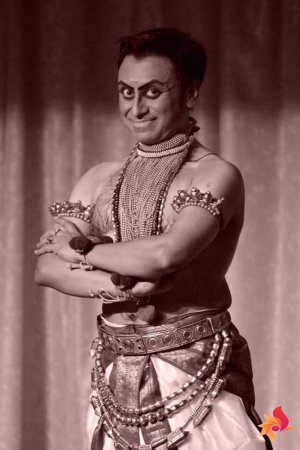 This critic clearly recalls how he was enthralled, years ago, to witness, on a ritual occasion,  the nightlong Kathakali performance in the sanctum sanctorum of Padmanabaswamy Temple under the twinkling lamps’ glow in the early hours of dawn and sat transfixed with its magic -- connecting THERE and THEN to the HERE and NOW... Yet, while performed on today’s proscenium stage under the glaring arc lights, spectators often miss the romance of this dance-theatre, one major reason being the unfamiliar attire worn by the dramatis personae. In this context, one also fondly recalls many demonstrations of Kathakali that the maestro Sadanam Balakrishnan gave, clad in the most simple attire, in the national capital and won over his audience.

When Prabal Gupta, the talented young dancer hailing from Kolkata, arrived in Kerala to become the disciple of the master artist Sadanam Balakrishnan, he encountered stiff  resistance from the local community against being absorbed in the Kathakali dancers’ fraternity. By sheer grit and struggle, Prabal achieved acceptance and became a Kathakali dancer of some eminence. Especially his streevesham dance of the Kathakali genre received national acclaim.
Read more in the site
Pl provide your name and email id (if you wish) at the end of your comment
Posted by Narthaki Blog at 13:53