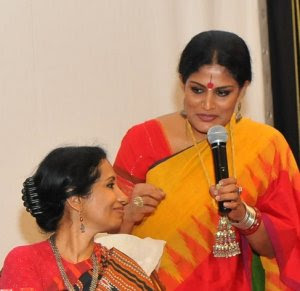 Sankalp Meshram and Alarmel Valli have contributed in a seamless manner to a very luminous, heartwarming film on Alarmel Valli. It was screened during the World Dance Day celebrations organized by Geeta Chandran under the aegis of her institution Natyavrikhsa, on 28th April 2012 at the Main Auditorium of India International Centre, New Delhi, and both the film director and dancer were present for after talk.

The screening has left such an indelible impression that when I was writing about it, some sections of the film ran over and over again in my mind, making me again relish the highlights, the rasa sthanas - the points of aesthetic delight. If you have known the dancer from her very young age and have followed her performances for more than three decades, and if you are an admirer of her dance, so many images, for someone like me, are repeated with more nuanced relish. The camera has captured Valli’s myriad moods with great felicity. Nothing looks contrived or for effect.

Read the article in the site
Posted by Narthaki Blog at 20:14