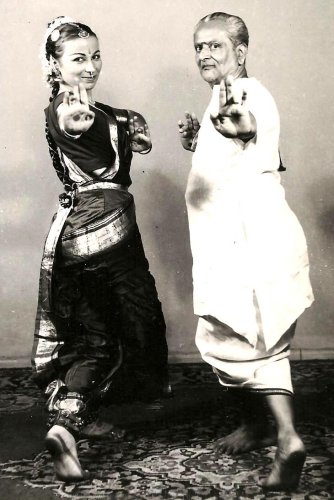 From an early age, Kalpana was influenced by the spirit of tradition, the western one. Both her parents were musicians, amateurs with a high level. Kalpana's birth name is Martine Métayer, and she was born in Paris. She duly learned flute for several years in a conservatoire. Her sister is a professional cello player.When Martine discovered Bharatanatyam by taking part in Malavika's workshop (1977), she faced a totally new and unexpected form of art where dance, theatre, music and poetry merged and offered a full aesthetic and intimate experience. After some classes with Malavika and Shakuntala she felt she had found the path she would follow for life. Moreover, starting from this moment she could explore the subtlety and the tiny nuances between two ways of practicing the same style.
At first, she managed to afford on her own, a short stay with Guru Muthuswamy Pillai (1980). She gained confidence that Bharatanatyam was the place where she felt alive. Two years later she obtained a scholarship (ICCR India and Ministry of Foreign Affairs - France). She could finally stay for several years in India, during which she was lucky enough to learn singing with Kamakshi Kuppuswamy and abhinaya with Kalanidhi Narayanan.

Anonymous derogatory comments will be removed. Please provide your name and email id along with your comment.