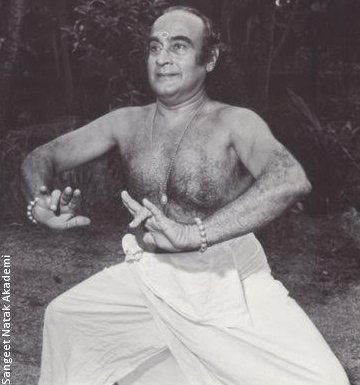 In my childhood, I grew up watching Guru Gopinath's Navarasa pictures in Mathrubhumi weekly and every now and then got inspired to imitate his exquisite facial expressions, least expecting that I would become a performing artiste at that time. Providence brought me to Kalakshetra in 1953, and ever since, I started watching him at close quarters performing at various venues in Madras whenever there were cultural delegations from foreign countries, where Kalakshetra was also a participant. I was really excited watching him at close quarters and tried to imbibe his histrionic excellence.My Kathakali Guru Chandu Panikkar was a great admirer of Guru Gopinath and used to comment that "the god given face of this man surpasses divinity of god himself." Listening to such comments from a legendary Kathakali Asan himself, we children took to heart Asan Gopinath as our 'manaseeka guru'.