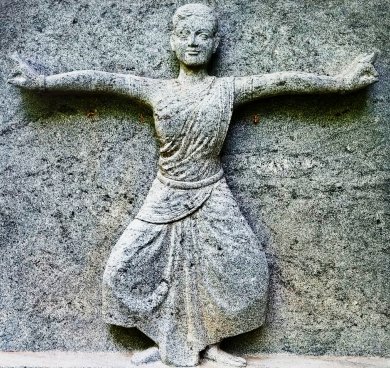 The present adavu system we employ in Bharatanatyam is totally different from the original Naatyasastra Karanas, except for a few postures which resemble a few of the karanas of Bharata’s Naatyasastra. I want to document the changes over the centuries from what is contained in the  Naatyasastra, thereby creating a record of the karanas that are currently in use. This will be helpful to people graduating from various schools and institutions as it will bridge the gap between the theory in the Naatyasastra and the current practice of Bharatanatyam.The Naatyasastra is the most important text of dramaturgy that Bhaarat has ever produced. Written by Sage Bharatha (between 500 BC to 300 AD), it serves as a comprehensive guide, extensively covering all aspects of theatre. Though the title literally means ‘Science of Theatre,’ the Naatyasastra contains fundamental facts about all our art forms. In 6,000 Samskritam slokas under 36 chapters, Naatyasastra covers all aspects of theatre and other art forms, beginning with origin of theatre, acting, costuming, make-up, properties, dance, music, poetic composition, play construction, grammar, audiences, rituals, and the architecture of theatre.There has been no concerted effort to update this treatise with the changes and evolution of the arts over the past several centuries. While scholars and artistes have made commentaries and translated the text into other languages, no one has extended the theories contained in the Naatyasastra to include the insights of later generations.