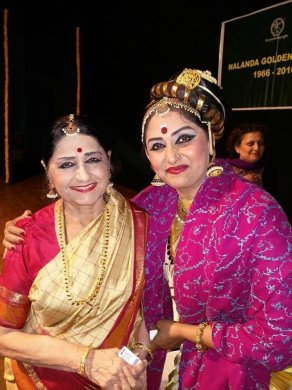 I continue with the series I have been writing about some of the fine gems in the world of Mohiniattam practitioners who made their mark with their profound contributions to elevate the status of the dance form, from that of a so called 'poor cousin of Bharatanatyam' to one of the most sought after dance forms globally today. In my earlier articles I covered the profiles of 3 very senior artistes who represent three distinct styles of Mohiniattam - Kalamandalam Sugandhi, Kala Vijayan and Nirmala Paniker. I now move on to an artiste who by age is much younger than these great gurus, but my intention is to cover yet another beautiful style or bani as they call it.

Her story is that of hard work and dedication with which she grew in stature much faster than anyone could imagine and stand quite tall among the top artistes in the Mohiniattam fraternity today. She follows another style in Mohiniattam which is popularly known as 'Nalanda Bani'. She is celebrated as a global ambassador of Mohiniattam by many in the media, for her contributions in taking the dance form across the globe. I am talking of Dr. Sunanda Nair, disciple of Dr. Kanak Rele.