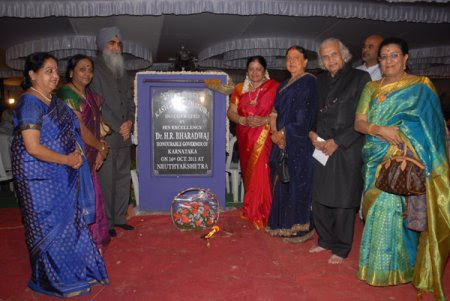 On 15th and 16th October 2011, Bangalore based Bharatanatyam guru Padmini Ramachandran, Director of Natyapriya, saw her dream come true. She had acquired a plot of land on which she by her own dint of hard work built an open air theatre, which was inaugurated in the presence of a large number of admirers, contemporary gurus, dancers and well wishers in Bangalore including leading gurus Radha Sridhar, Lalitha Srinivasan, Bhanumathi and others.
Padmini Ramachandran's fond dream was of a centre for cultural excellence and well rounded education in dance and music. Therefore when the Government of Karnataka granted her an acre of land to build her cultural institution, she felt that her prayers were answered. Through dance, she has touched many lives and continues to mould the careers of the young generation.  The students of Natyapriya are known for their outstanding performances. Many have performed in national festivals at Mumbai, Chennai, Kolkata and main cultural centers in Karnataka. Several students are Central and State government merit scholarship holders. Her daughter and disciple Kanya Ramachandran Tayalia, has dedicated her life to carry forward the legacy of Natyapriya.

Read the article in the site
Posted by Narthaki Blog at 04:57