A Bani is the result of a creative process where a mind is engaged in reconstructing an art discipline to a certain aesthetic elevation by breaking the existing norms akin to a system practiced. The conceived mind here, leads to a customization of a whole new system of stylization. This pursuit of the mind may be subjective for others at that time of conception, but it will certainly lead to becoming a milestone for the art form itself, through successful performances of practitioners. Here, a Bani gets established. The established Bani carries a distinct identity that can be traced based on the social background and geographic location.

In a more specific sense, a Bani can be understood as the discipline applied on the art form in terms of practice. To cite an example in the Carnatic music tradition, a Bani or a school may be identified either based on the richness in Bhava, or when it is more inclined towards exploring the laya vyavahara, or when the focus is concentrated on intricately webbing a raga alapana while rendering a kirtana. For ex. in Veena Dhanammal Bani, we will see the elaborate exploration of raga along with interludes of laya, an Ariyakudi Ramanuja Iyengar school had more emphasis laid on the laya aspects than on raga alapana. Or later, in a Semmangudi school – the rendition of a kirthana strictly maintained a pad’athi in its gamakas that was passed on generation after generation, while in a Madurai Mani Iyer’s school, the rendition of kirtanas allowed a certain artistic freedom which itself can be called a pad’athi. The above examples explain different Bani-s(schools) with regard to musical pedagogies. Similarly, for dance forms, the pedagogical differences in imbibing the art form as a practice would be - the musical genre adopted by the nattuvanar-s, the characteristics of nritta and nritya elements in the dance, the continuing signature of the founder (passed down) in the tradition; all put together become the yardstick in defining a school. 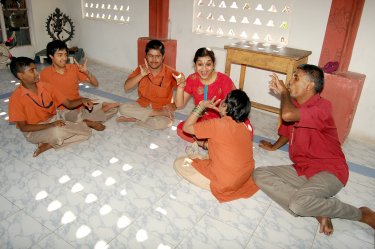 Ever since I was a little girl I was exposed to the wonderful art forms of dance and music.  I always got so much from them that I believed strongly in dance and music being far more than ‘merely’ performing arts. Structured dance and music and their performance is, I believed, and believe, only a part of the whole.  For me, in the movement of the trees, the leap of the deer, the prancing of the waves, in the laughter of children, in the tears of the afflicted and expressions of the proud parent…In every single movement of the universe, there is dance and in every single sound there is music.

My belief would have remained a belief, but for god giving me opportunity after opportunity for reinforcing my belief and helping me structure dance, music and drama into a methodology that does not only result in performance but goes far deeper seeking and fulfilling every developmental need of an individual. From 1982, when I started working with the visually impaired children at Ramana Maharishi Academy for the blind, Bangalore and in 1985 when I volunteered to teach dance and music to children of Spastic Society of India (now Vidya Sagar) till I started Rasa – Ramana Sunritya Aalaya in 1989, I found fulfillment in structuring and documenting the new methodology of holistic self development which I first called C.M.E. (Creative Movement Education) and later changed the term to T.H.D (Theatre for Holistic Development) for it covered the scope of the methodology more fully.

Read the article in the site
Posted by Narthaki Blog at 00:30 2 comments: Links to this post 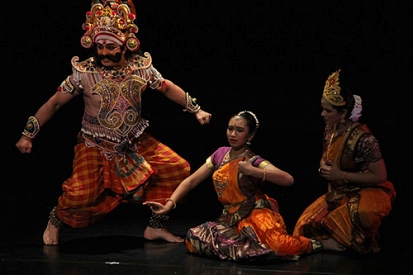 The first edition of a welcome international dance festival in Singapore aiming at covering Asian classical dances was flagged off with an interesting performance by Priyadarsini Govind, one of the leading lights of India’s Bharatanatyam performers and the enfant terrible of Carnatic music, vocalist TM Krishna from Chennai. Generally, Carnatic vocalists do not sing for a dance recital. But here are two vastly gifted dancer and musician of present generation who have boldly attempted to explore classical dance and music together, none trying to upstage each other, but work together with a deep understanding of the two forms, with mutual respect. And the artistic experience has been something which one relishes with great delight, going along with them with curiosity and its successful denouement.

All this and many other concepts were offered on a silver platter by Singapore based renowned Bharatanatyam exponent Gayatri  Sriram, whose Shrutilaya institute was the producer of the festival organized  by  Jyoti Ramesh, whose passion for dance, music and performing arts has found an ideal expression in event management.  Presenting sponsor was the Bank of Singapore (BSi), in collaboration with the Jade group, and with support from various agencies, the three day festival from 14th till 16th September 2012 at The University Cultural Centre, National University of Singapore (NUS), was a runaway success.


Read the review in the site 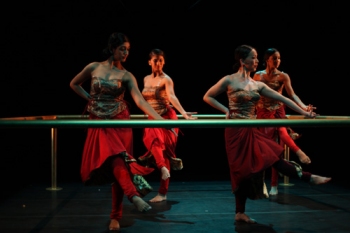 Sutra Foundation’s Tarikan Dance Festival 2102 featured two new choreographic works  under the title ‘Transfigurations’: ‘Panjara’ choreographed by Sutra’s Rathimalar Govindarajoo and ‘She Ra’ choreographed by Dutch born Kalpana Raghuraman (Korzo Theatre, The Hague). I caught up with the last performance of these two works on 2nd September 2012 at KLPac Studio 2 at Kuala Lumpur, managing to arrive from Singapore in time.

Ramli Ibrahim had informed me that these two works examine myths - the archetypes of mythology and how their avatars perpetuate these in our contemporary psyches in various transfigurations. Ramli’s and Sutra Foundation’s creative journeys are not limited to the traditional, classical Indian dance forms. In his early youth, Ramli had performed in Sydney Dance Company at Sydney Opera House in modern choreographic works of Graeme Murphy, a leading choreographer from Australia. Poppy, choreographed by Graeme featured him in a decadent tango, a multi media dance theatre based on the life and times of Jean Cocteau. That was in 1978. Ramli has since then choreographed and performed several contemporary works within Malaysia and abroad.

Like a jeweler, RamIi has redesigned these pallavis with imagination investing them with newness and arresting beauty. These are rearranged for group composition by Guna and Ramli and they capture the attention of the audiences the moment the very first strain of musical instruments is heard. Sivarajah Natarajan’s set design, with back drop of patterned flowers and  arches, reminding one of the arch of Rani Gumpha cave sculpture, and exquisite, at times diffused and at times effulgent, lighting of various hues and colours, evoking different moods, and in consonance with music and movements takes one’s breath away. There is such wonderful rapport among the choreographers, the dancers and the lights designer, built over many years that the entire production from the word go to the end, mesmerizes the onlookers.

Dance has been part of nature from the resurgence of life itself.  Dance has slowly and steadily evolved from mere expressions of joy and sorrow, to celebration of life, to exposition of rituals and belief systems, to evolution of human psyche.  When I was virtually traversing through this dance hierarchy, it was the most humbling experience to realise the expressions of great minds that have soared higher than the mundane existence and recreated and represented subtle truths through their evocative expressions.

Dance once was just the simple venting of one’s inner feelings which later became a medium of storytelling. It was an oral tradition unintentionally recording our history, culture and traditions. As human mind evolved, these expressions acquired new horizons and newer meanings, accentuating on theories of Rasa (aesthetics).  It became a gratification for the senses and akin to enlightenment for the soul.

Read the article in the site
Posted by Narthaki Blog at 02:46 No comments: Links to this post

Italian by birth, Dr. Ileana Citaristi holds a Doctorate in Philosophy with a thesis on 'Psychoanalysis and eastern mythology.' She came to Indian dance after years of experience in the traditional as well as experimental theatre in Europe. An exponent of Odissi and Mayurbhanj Chhau, Ileana has made Odisha her home since 1979.  She learnt Mayurbhanj Chhau under the guidance of Guru Hari Nayak, obtaining the title of ‘Acharya’ from the Sangeet Mahavidyalya of Bhubaneswar in Orissa. A senior disciple of Odissi Guru Kelucharan Mohapatra, she founded Art Vision in 1996 with a group of artistes belonging to different disciplines such as dance, music, painting and literature to share creative ideas. One such is Kalinga Mahotsav, a national festival for martial arts organized with Odisha Tourism Department at Dhauli Stupa from 2003.

The Art Vision Academy conducts classes in Odissi and Chhau. The performing unit has performed in many prestigious conferences and festivals in India and overseas. Ileana Citaristi’s contributions, besides the many performances and lec-dems include articles on Oriya culture published in Indian and foreign magazines, research work for film documentaries on Odissi and Chhau dances and practical dance workshops for dancers and theatre workers which she regularly conducts on invitation from different institutions in India and abroad. 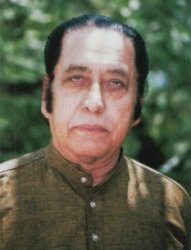 He desired he either pass away on stage, like his guru, the great Gopinath, or in sleep. He did pass away peacefully in his sleep, on Teacher’s Day, 5th September 2012 in Chennai.

Born on April 9, 1926 in Kodungallur, this scion of Nanthialath and Changaradi tharavads (households) was destined to take to dance. His parents Nanthialath Madhava Menon and Changaradi Ammalu Amma let him pursue his passion, which was sparked by seeing T.R. Sundaram’s film ‘Balan’ in 1938.

He desired to learn Kathakali from the masters but chance brought him to Madras to be at the Gemini Studios and come in contact with the legendary Guru Gopinath, then based in Madras. In 1946, he joined the Natana Niketan dance school. Madras was then a very happening place for dance and films and many fortunes and fame were being made. Guru Gopinath was choreographing and dancing for many films, thus Gopalakrishnan got a firm foothold in the dance and film world. He was promoted to become lead dancer in Guru Gopinath’s troupe.

Read the tribute in the site
Posted by Narthaki Blog at 18:01 No comments: Links to this post

The living legend of Indian classical music, Pandit Jasraj needs no introduction. In honour of this unparalleled living legend, awards and titles have not only been created and bestowed upon him, but have also been instituted in his name. Endowed with a rich, soulful and sonorous voice, Pandit Jasraj’s singing is characterized by a harmonious blend of classic and opulent elements, projecting traditional music with an intense spiritual expression. This gives his music a very sublime emotional quality, touching the soul of the listener. This sensitivity together with classical approach, has given his singing a lyrical quality which is the quintessence of the Mewati style of singing.

Posted by Narthaki Blog at 15:07 No comments: Links to this post