Auditions is a systematic process in which professionals select suitable artists who are required to give a sample performance. If you compare it to other industries it’s more or less like a job interview, only harder because your body cannot lie.

In the field of dance, there are different types of auditions conducted for varied purposes.

1. Projects
2. Recruitment-part/full time
3. Admission (educational-university/workshop/residency/certified courses etc.)
Usually the information will be carried on the website or audition listing of all communication medium.

However there are certain basic etiquette and requirements common for all dance auditions.

Read the article in the site
Posted by Narthaki Blog at 16:32 No comments: Links to this post 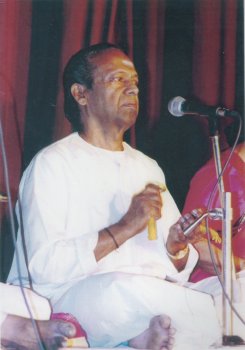 A senior guru and Director of Sri Rajarajeswari Bharatha Natya Kala Mandir, regarded as an institution par excellence for Bharatanatyam, K Kalyanasundaram is the torch bearer of the Thanjavur tradition of Bharatanatyam. He celebrates his 80th birthday on March 1, 2012.

Hailing from a family of Nattuvanar parampara, traditional dance teachers, now in its eighth generation, Thiruvidaimarudur Kuppiah Kalyanasundaram made his debut at the age of six at the Sri Kumbeswaran Temple (of Maha Maham fame) in Kumbakonam, Tamil Nadu, on the auspicious day of Aarudhra Darsanam. “People were curious to see a nattuvanar’s son dance. It was the 1940s, so the only lighting came from the temple lamps, and my costume was a dhoti and angavastram tied around my waist,” remembers Guruji. He imbibed the art from his father Guru Kuppiah Pillai, his brother Guru Mahalingam Pillai, his brother-in-law Guru Govindraj Pillai and sister Karunambal. His grandfather Guru Panchapakesa nattuvanar was an authority on abhinaya and is credited with compiling the Tamil treatise ‘Abhinaya Navaneetham,’ a monumental treatise on abhinaya, a practical guide specially on  Hastabhinaya.

Read the article in the site
Posted by Narthaki Blog at 03:36 2 comments: Links to this post 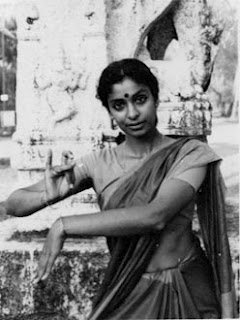 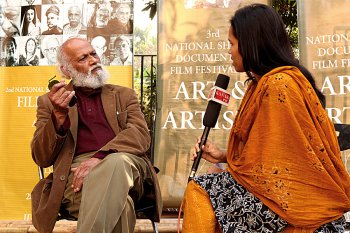 This year the theme was ‘Celebrating and Reminiscing Masters’ who recently passed away - Jehangir Sabavala, MF Hussain, Dashrath Patel, Rudra Veena player Ustad Asad Ali Khan, who was Jatin’s and my neighbor at Asiad Village,  BC Sanyal saab, Mani Kaul. Documentary films on them and Mai Kaul’s films, Nandan Saxena and his wife Kavita Saxena’s films on poetry, Renuka George’s film on Ustad Asad Ali Khan, Navroz Contractor’s film on Zadu (brooms), Arun Khopkar’s on Jehangir Sabavala - Absence of Colours - one on Hussain when he was in Dubai and painters from India went there to see him, film made by Bidisha Ray Das, were screened and were attended by large crowds.

Read the article in the site
Posted by Narthaki Blog at 12:16 No comments: Links to this post

The grand old lady of Kathak, Pandita Ramadevi Lachchu Maharaj died at the age of 86 in Mumbai on 24th December 2011. Sadly her demise was hardly noticed by the media. In an exclusive interview, her ardent disciple Paullomi Mukherjee Naik reveals her experience with her mentor and the persona of the grand old lady who always maintained a low profile as she felt that the art would speak for itself.

Such a realization hit me hard, in an unexpected moment, and without my knowledge, has opened the doors to deeper, subtler paths of thinking beyond.
It happened as I was happily, nonchalantly, strolling on my terrace during sunset, trying to imprint myself in the memories of the beautiful twilight. It was a realization so simple that though most of us would know it, it would hardly suffice until it is realized in its entirety.

Being a dancer is a thing of great pride for me; but that evening, as I watched Nature dancing to the rhythms of silence, spellbound, it not only made me embrace my passion closer to my soul but also made me realize that dance could exist without us ‘dancers’; without being captured in the frames of our body.
Movement - is everywhere.

The choreography and powerful presentations of Malavika Sarukkai, Priyadarsini Govind and Rama Vaidyanathan have influenced many dancers of the new generation. Some also follow the new entrant to top category, Mythili Prakash, closely. However it was interesting to note that some of these new generation dancers have finally come out from their shells with a fresh individual approach and with their own choreography, which in turn has brought them recognition. Though there are many highly talented, hardworking and creative dancers ready to carry forward the responsibility from the current divas, I took notice of four serious, dedicated and thinking dancers. They are Janaki Rangarajan, Navia Menon, Lavanya Ananth and the firebrand Rukmini Vijayakumar. Thus, I have come out with a new short form – Janalamini – made up of their four names. I hope to see these four dancers conquering the Bharatanatyam dance scene from now on.

Read the article in the site

Posted by Narthaki Blog at 19:15 15 comments: Links to this post